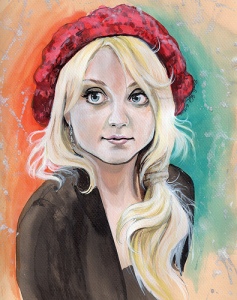 Harry Potter was ever in the public eye.  Everyone treated him differently because they knew who he was, some better and some worse.  There are many characters in Rowling’s books that barely get noticed at all.  Ron and Hermione get quite a bit of attention, partly reflected, as do his most notable rivals.  We meet Luna Lovegood, but she is far from featured.  But what of all those other Griffindor students, or even more obscure, the Hufflepuffs?  There are far more characters who could use a little bit of visibility in this and in every story.  I don’t mean to suggest that an author try to reveal every character in every book.  There are millions of people out there who would like their invisibility cloaks removed, if only for a few moments.

There are many invisible people in the Bible. For instance the mothers of almost all those men named in the seemingly endless lists in Numbers.  The women and children of those 5,000 men who were fed with 5 barley loaves and 2 fish, and those of the 4,ooo fed with 7 loaves and a few small fish were only visible as an afterthought, but not counted in the number of the miracle.

Just as Jesus was in need of invisibility in his early life, he chooses to whisk the cloak off many of the invisible people of his day; women, children, lepers, people with embarrassing health problems, the poor, the humble etc.   He did this in a number of different ways;

Jesus drew away the cloak for the children in Matthew 9:14 when the disciples wanted to shoo them away and he told them instead to, “Let the little children come to me.”  He was granting them his time and attention.

He drew the cloak away from the lepers he healed who would otherwise have lived their lives out in isolation.  The man who couldn’t get to the healing waters before others had gotten there first was healed where he had been totally overlooked by everyone else.  The woman who had been considered unclean for years due to constant bleeding was healed and thus allowed back into everyday lives of those whom she loved.

There were women to whom Jesus actually spoke, which really wasn’t common in the time.  He spoke to a Samaritan woman at the well despite the stigma of her being Samaritan and having a reputation of being with many men.

We hear reports of Jesus speaking more than once with two sisters Mary, and Martha.  He ate at their home, Mary sat at his feet and listened to his teaching and he even praised her for this choice.  In fact, the names Mary and Martha are mentioned more times in the Bible than those of a some of the disciples.

Jesus ate meals with people who were not invisible but infamous.  He ate with tax collectors like Zacchaeus who was reviled by his neighbours.

People will go to great lengths to be noticed.  If you question this then I encourage you to watch some of the “reality” tv shows.  People need love and belonging and would rather get negative attention than no attention.  To get their “ten minutes of fame” some people even commit violent acts which then result in their imprisonment for life.  For a few days, or months though everyone knew their name.

Do you remember the old tv show Cheers?  The theme song for that show said, “You wanna be where everybody knows your name.”  We can all do something to remove somebody’s invisibility cloak for a moment.  Follow Jesus’ example.  We may not be able to heal their physical ailments but surely we can make a point of speaking to someone who seems left out.  We can learn people’s names and then using it when you greet them.  Maybe instead of grabbing your lunch or coffee and running you might choose to take the time to sit down with someone to share the meal. 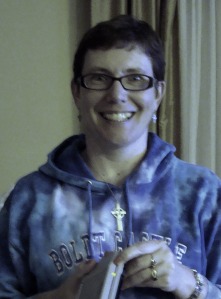 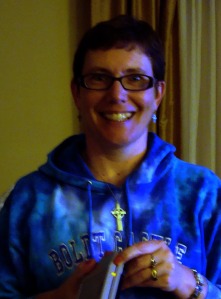 Mary and Martha both heard my alarm at 6:00 this morning.  I’m not sure which one it was who turned it off, but I do know that it was Martha who dragged me out of bed and got me moving forty minutes later.  Clothing appropriate to the day was chosen, some semblance of breakfast eaten, lunch was packed, and it was off to work.

Mary made a brief appearance while I was driving to work.  She reflected on the Easter weekend that has just passed, the fact that this was a new day and as it says in a popular song from the 70’s Every Morning Is Easter Morning From Now On!  I think she even hummed a little bit of the tune.  Once in view of the school, though, Martha took over again with thoughts about what my students would be doing today and errands I needed to get done.

Last night the devotion in The Message\\Remix:Solo was about the familiar story from Luke 10:38 – 42 of a dinner party at the home of Mary, and Martha.  Jesus was the guest of honour and as he talked with his host and the other guests, Mary sat taking it all in with rapt attention.  In the meantime there was a meal to prepare!  Martha, unlike Mary, did not give herself the time to sit down and listen, she was busy tending to the preparations.  When Martha complains about Mary’s lack of help, Jesus tells her that Mary has made the better choice by staying with him and listening.

Martha is not the “evil twin” here.  If it were not for Martha, Jesus would not have even been in their home.  It states at the beginning of the reading, “A woman by the name of Martha welcomed him (Jesus) and made him feel quite at home.”  It takes a special talent to put someone at ease in your home when they are visiting, and Martha did a great job of that.  She then got carried away, though,  by the minutia of hostessing the party and did not sit down to enjoy her guest’s company.

We are all some combination of these two women, or if you prefer some combination of these two inclinations.  I started this blog with a representation of my day through the lens of the two women.  That was one part of the devotion last night, taking time to reflect and let Jesus tell us whether we are more Mary or Martha on a given day or in a given experience.  Some Sundays I am definitely Martha at church.  I have responsibilities, music to worry about, plans and issues for later in the day, and my Martha is on the job.  Worship is so much better on the days when my Mary attends and I am able to fully engage in the word and the celebration.  On the average day I am more Martha, although my house may not reflect that in its cleanliness and tidiness, and I expect that is true for most of us.

If we were all Mary all the time nothing much would get done in our homes or workplaces.  I’m not sure even a 50/50 split would be ideal, but we do need to beware of the dangers of slipping too far over to the Martha.  If we give no time to listening to God, the three-in-one, then we risk losing our way in a world just looking for lost souls of whom to take advantage.  So, look back at your day today.  What was your own Martha/Mary balance like?