I guess it is time that I admit that I am not the typical tourist.  I would guess that the average tourist who heads off for a week in a tropical location looks forward to sitting in the sun, soaking up the rays, seeing the sites, walking the sandy beaches, swimming in the ocean, and marveling at the bright tropical colours.  On a trip to Mexico many would look forward to the beach and snorkeling to see the tropical fish, while others may have plans to see all the archaeological sites of the Mayan and Aztec cultures.  The last thing one would want is to have their plans spoiled by rain.  I take lots of sunscreen to avoid burning, seek shady spots to sit, don’t really like getting sandy, don’t mind a rainy day or two and plan to get lots of reading done.  Don’t get me wrong, I do love visiting Mexico with all its colours; whether natural, in the art and embroidery, culture, or in the music, but I am different from most of the people whom I see there.

A while back I wrote a post about showing our true colours (http://wp.me/p1hsO8-64) for which the basis was a story about my trip to Cancun a couple of years ago and the fact that the birds I was most interested in were the great-tailed grackles and not any of the fancy tropical birds.  I was so intrigued by them, in fact, that I neglected to take a single picture of them.  Having just spent a week in Cancun again, I did much better.  The most interesting bird to me, by far, was still the grackle and I even managed to get a number of pictures.  Sure, we saw flamingos, frigate birds, macaws, parrots of various species, a jaguar, a panther, etc. but those birds who are so numerous that I imagine most local people don’t even notice them anymore, remain my favourites.

This picture of one of the females at our resort is just one of many that I took of the arguably less attractive female of the species.  I enjoyed watching them chase each other away from the restaurant area where they were watching for leftover bits of food from people’s plates.  They would sit on the railing or in nearby trees waiting for a waiter to clear a table and then they would swoop down on the tray of dishes to see what morsels were left for them.  There was one in particular who did not like having competition for the food, nor for the cute males who were busy trying to get their attention.

These two gentlemen are headed into this pool for a drink and likely a bath in the pool of the nursery section of Xcaret where the focus is on raising birds of many of the species on the threatened and endangered list like some of the species of parrots, vultures etc.  Clearly these simple black birds are far from endangered, but are happy to avail themselves of the amenities regardless.  Plain as these birds are, if you watch their behaviour you can see their personalities and individuality showing just as plainly as the more colourful birds.

Maybe I identify more with the grackle than with the macaws and parrots.  After all, I don’t really have bright plumage, I don’t make for great postcard type pictures.  Like the grackles and rainstorms, I will not turn up depicted in art work or souveniers to sell to people to remind them of their visit to a brighter world.   I do, however, have a voice that gets people’s attention and hopefully a “song” or two which will brighten their days.

So here’s to the common birds, the everyday people and to the rainy days! 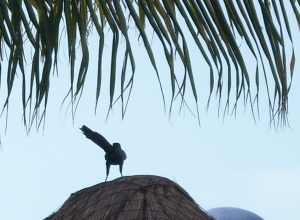 My sister and I just got back from a trip to Cancun.  We had been there before and planned to mostly sit in the shade and read books.  We did decide to visit Xcaret (esh-ca-ret) which is one of the biggest parks in the Cancun area.  There is so much to do there that we will need to go back several times to cover everything.  Our biggest adventure was definitely when we decided to go ahead and try snorkeling through the cenotes (underground rivers).We hummed and hawed considerably, but eventually packed our things in a locked waterproof bag to be taken to the outlet area next to the sea.  Next we got in line and picked up flotation vests, goggles, snorkels, and swim fins.  We set off to the entrance spot. 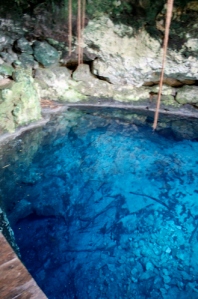 Our swim in through a cenote began with gingerly stepping into the cold water in a brightly lit and beautifully clear pool.  Once acclimated to the temperature it is quite beautiful and little effort is required due to your flotation device.  A little practice breathing with the snorkel and we were off…

Faces down in the water and breathing through our snorkels we headed off down  the river.  We were a little nervous, but  reassured by the idea that it was a river and would head directly to the sea.  What could go wrong with that?  Well, it sounded good!  We quickly moved from this swim in the sunlight, into… 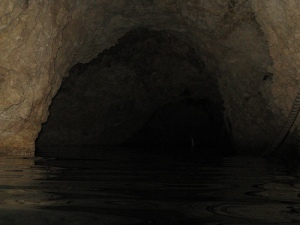 the dark.  While you were able in the darker underground areas to see a glimmer of light up ahead, this was only the case when you had your head above water.  When you swam into these areas with your face down you were frequently unable to see anything.  It is here that the trouble began.

There were two main problems; staying together and finding the right path.  With my sister in the lead not lifting her head at any point I was aware when we took our first wrong turn but unable to catch up to grab her swim fins there was no way to get the message to her.  When we came to the next open area, which had no outlet, I explained about our wrong turn and we headed back around.  Eventually we ended up behind the group who had entered after us and came out into another open area where a man who worked for the park wanted us to pose for a picture.  Somewhat dazed, we complied but didn’t strike any happy thumbs up pose at all and in the end we didn’t manage to find and buy the picture which would have been our only proof that we had really gone on this excursion.

We left that area, headed downstream.  I led this time and all was going well, I thought.  We came into the light in another spot but it seemed that we shouldn’t have been there.  With a picture of the map of the park in our heads, it seemed that we had somehow gone in the wrong direction again.  We made the decision to go back to the start  and get out.

If you have been paying attention, you will know that this decision meant that we would be swimming upstream the whole rest of the time in the cenote.  Did I mention that I am a middle-aged, not terribly fit individual?  We only made one more wrong turn in our adventure but the struggle to keep up and stay in contact was considerable for me.  Very often I felt that as much as I used my feet to propel me, I was going nowhere.  I had to use my arms most of the time just to keep up.

How did we end up getting out of the cenote?  My sister, in the lead, stopped frequently to make sure I was still with her and encourage me,  and I followed her bubbles which, under water, is the same as following her breath.  So long as I was near the bubbles, I knew that even if we were lost, we were lost together.

What lessons may be taken from the story of our adventure?
1. If you have to go into the dark, take a friend.

2.When you are leading people don’t forget to lift your head up to stay on track.

3. When you are in the lead, stop frequently to be sure those behind you are still there, and encourage them.

4. Stay together in dark as well as in the light.

5. It is harder work getting back on track once you have taken a wrong turn, but do it anyway.

6. Like your life vest, God will keep you afloat come what may.

7. There is no substitute for a good map (Bible) or a guide (Jesus).

8. No matter what, keep the bubbles (the breath of God or the Spirit) in view at all times.

Show Off The Colours God Gave You 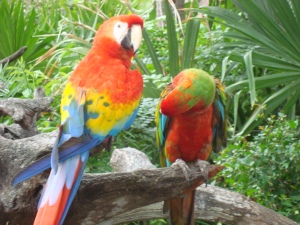 A few years ago my sister and I spent a week in July in Cancun .  The colours there seemed more brilliant than here at home.  Among the many animals I saw while there we saw iguanas, the above macaws, brightly coloured fish etc.  I took lots of pictures, like the one above, but the bird that held my heart while we were there and kept me continually entertained was plain black.  Locally called the cenote, this bird is the great tailed grackle.  Yes, it was basically the same bird that often covers my front lawn at home to which I give only passing attention!  I was so enchanted with these birds that I actually didn’t take a single picture of them.

I enjoyed watching their personalities which were clear while they watched for a snack at the open restaurant, puffed themselves up to get the attention of a female, and their voices called to me all day long.  These otherwise plain birds represent that awesome week to me, not the showy ones.

So what colours are you?  Just as God has given different colours to different birds He has given each of us our own unique “colour.”  I don’t mean skin colour, brown, blonde, red or black hair, nor do I mean blue, brown, hazel eyes.  These things are not what give people their colour.  We get our colour from our personalities, our talents and we show them through our beliefs and our behaviours.

In September of 2007 a Grade 9 boy at Central Kings Rural High School in Nova Scotia wore a pink polo shirt on his first day of school.  He was bullied, called gay and threatened with being beat up. Two grade 12 students took it upon themselves to rectify the situation.  They spread the word using the internet and were on hand the next day passing out 50 pink t-shirts they had purchased at a discount store for people to wear along with many who wore their own pink clothes.  These students sent a message that day that is now repeated all around North America on Pink T-Shirt Day (Feb 23 this year).  That day in 2007 these two boys showed their beautiful colour to that young man and to all of us.

Your God-given colour is there waiting to shine.  Perhaps you will join with people on Wednesday to wear pink in protest of bullying in our society.  Perhaps your colour will express itself through your donations to a charity, or through your actions to lobby for help for the marginalized people in our society.  Maybe it will be seen as you listen to a friend who needs support.  Whatever form your talent takes it will only show your colour if you put it to use.  Go ahead…show your colours!