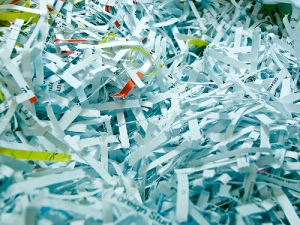 This morning I spent some time beside the shredder at our church putting old records and documents through and taking out the little tiny pieces of paper they turned into.  In went bank deposit books from ten years ago, old phone lists, meeting minutes etc. and out came material for the composter out back.

I started this exercise because I noticed the three large paper boxes on a shelf above where we hang our coats with a sign on them, “To Shred.”  They have been there for a little while and I had some time, so I decided to put a dent in pile.  With the amount of paper records put out each year in the church there comes a time when there just isn’t enough storage space to keep it all.  And really, who is ever going to want to find out how much I gave to a fundraising effort ten years ago?  I didn’t look closely at any of the pages other than to read headings or notice the occasional date.

Those documents dated in 1996 got me thinking about what was happening in the lives of both my family and my church.  Early in 1996 my youngest child was born, and it seems like just yesterday.  Of course it was not just yesterday, it was fifteen years ago.  So much has happened in that time.  For instance, our church has had two different ministers in that time, we have a new roof, a new organ, new gas stoves in the kitchen etc.  People have been born, baptised, married, and buried.  Many of the names that flitted past me are those of members who have since died or moved away,  while some are those of the people who are still very active in the leadership of the church today.

I started thinking about stories of people trying to get birth certificates in the “old days,” and having problems because records were lost in church fires.  This seems to have been such a loss, and yet here I was, the modern version of the church fire.  Obviously, I was not shredding baptism or marriage records or anything like that.  These days the church is not responsible for recording births and deaths, that is all handled by the government, but now we shred anything that might have a person’s contact information listed,  and financial documents over five years old.

At the same time as we have unprecedented privacy regulations, we have unprecedented levels of self-disclosure through social media and other programs.  The same teens whose names we are not allowed to print on a list to give to classmates, are telling the world what they are having for breakfast, wearing or doing in a steady stream throughout the day.  If we can’t find some happy medium somehow I think future historians will be at a disadvantage.