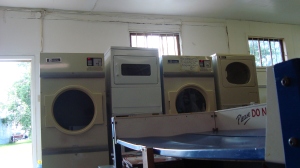 Last summer my daughter was at camp for a month and part-way through that time I met her for a weekend.  One of the main tasks for the weekend was to get all her laundry washed.  We weren’t at home so that meant heading to the laundromat with her bags.  It had been years since I had been to one, and she had never had the experience of getting her dirty laundry out of a bag and into washers in a public place.  When I came across the picture above it got me thinking.  W hen you think about some of the things that have changed in the last fifty years or so, one of the big changes will be in the area of what things are private and what is public.  The expression in the title was a common thing to hear ‘back in the day’.

There have been some very important advances made with the end of the dirty laundry plan.  Some of the things that were not aired were; child abuse, spousal abuse, alcoholism, mental disabilities, physical disabilities, mental illness etc.  People who were different had been kept behind closed doors.  People who needed help had no way of getting help.  This has changed.  Most people in our society today do not consider family violence acceptable and we have processes in place, child protection, transition houses etc, to help the victims and laws in place to deal with the abusers.  We no longer lock up most people with metal illness and have found successful ways to treat most illnesses.  This is all good!

My concern lies in the popularity of “reality” shows in which people with serious problems allow themselves to be filmed while dealing with them.  The show Intervention for instance films people in the very midst of their addictions.  There is some instructive or cautionary value to these shows, but I don’t think that it is good for the addicts in general and I think that too much of it is possibly harmful for the viewers as well.  Someday, presumably, the addicts will recover and want to put that behind them, but their children and grandchildren will have that ugly footage with which to come to grips.  There is a big difference between being in the public enough to get help and being in the public media!

It is debatable whether or not public figures like politicians and stars have the same right to privacy for their “laundry.”  On one hand, if you choose to be in the public eye then you ought to know that your life will be an open book.  It is only right that people should know about the personal life of the people for whom they vote.  On the other hand, who among us doesn’t have a secret or two we would prefer didn’t go public?  Does it follow that a politician who cheats on his or her spouse will do a poor job representing his or her constituency, or making decisions for the public good?

Jesus is noted for having hung around with the wrong types of people.  These tax collectors and other sinful people had lots of dirty laundry and everyone knew it.  The Samaritan woman at the well in John 4:5-42 had gone through 5 husbands already and was living with a man to whom she was not married.  I’m sure that the people in town were all too aware of this, but she didn’t have it written on her robe and was not out there telling everyone she met.  And yet, Jesus knew all about her.  Whether or not our faults and failings are public knowledge we know that they are at least open knowledge for God.

For most of us, our dirty laundry consists of mistakes we have made of which we are not proud and which we would like to keep quiet.  They are those very sins for which we need the forgiveness that has been offered us through the grace of God.  We don’t need to wave these sins on flags in public, indeed we don’t need to confess them to an intercessor, we just need to lay them before God and ask for forgiveness.  Jesus has already paid the price of public humiliation and death for those sins so that we are reconciled with God through him.  You don’t need to go public with your sins, just admit them and take them to God.