A Different View Of Narative: Is This How God Sees History? 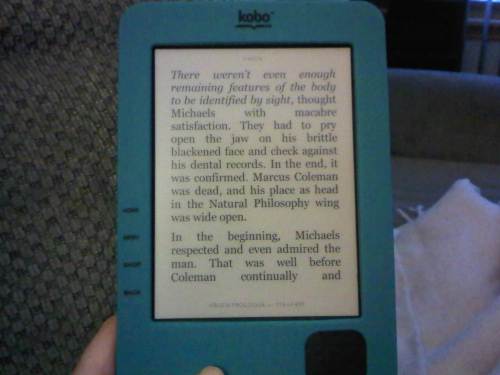 Hundreds of Books In My Hand

I was listening to a radio talk show on CBC today, as I often do when I am in the car.  The topic today was ‘the book’ and the place in our lives for books with paper, ink and bindings at a time when we can carry hundreds of books with us everywhere on  Kobos, Kindles, IPads etc.  They were talking about being able to be in on and or read a record of the social process that goes into writing a book as well as the social experience of reading and talking with others about the book.  They mentioned the way in which writing changed as it became adapted to portrayal on movie, and later TV screens.  The question was, would writing for e-books differ in any way from writing for printed and bound books?

This got me thinking about the way text works on a computer, specifically text wrapping.  When you write on a page of paper you literally move your hand and pen to a new location once you run out of space on one line.  This is not really the case anymore for those of us who use the computer as our writing implement.   If there were no limit to the screen size our sentences and paragraphs would just continue in one unending line, like a timeline.  When we are talking about a narrative form of writing this actually makes a great deal of sense as it would literally represent the passage of time in the plot.

Imagine with me…If there was some way for this format to actually exist the beginning of the story would be on the far left and the ending would be perhaps a great distance to its right on the same plane.  If there were flashbacks they would have to actually precede the beginning but may appear on a second line of text with an indication perhaps a second chapter marking or something.  Similarly if there were going to be another perspective introduced, say that of another character, which coincided in time with the main plot it would need to be in the correct space on the timeline but below the main plot line.  I suppose in the interest of space one might allow for a new timeline for each section of the story otherwise our texts would take far more than the space the walls in one room could accommodate.  For people who struggle with keeping track of the plot with twists and turns and reflections forward and backward, this format would provide a clear visual delineation while allowing you to see the whole thing there at once.

This is not, obviously, something that will ever happen; although if there is an artist interested in the idea for an exhibition they are welcome to the idea.  There are far more obstacles involved than would be worth it.

Now think for a moment about what we know about God;

He sort of sounds like the ultimate narrative author.  But what of the idea of predestination?  The idea that God already knows what will happen in all of our life, including all the choices we will ever make, even before we are born is often dismissed as totally ridiculous.  People feel that there is no way to reconcile the idea that our actions are predestined with the notion of free will.  This is where my narrative image above might help.  I believe that God does not see the world and time in the same way as we do.  I believe, in fact, that God sees literally everything that is happening, has happened and will happened all at the same time every moment.  So, while I may have the free will to make big mistakes, God already knew I would make them and put in place choices for me to get back on track.

We are only able to look back on what has happened this far in our lives and  can now identify the turning points which were not apparent at the time.  We can try to look forward to the future but not with any clarity.  All we can see is this moment right here and now.  Isn’t it at least a bit comforting to know that there is someone far greater than us, who already knows how the story turns out, who will, in our future, keep giving us the chance to redeem our mistakes?

“For you created my inmost being; you knit me together in my mother’s womb. I praise you because I am fearfully and wonderfully made; your works are wonderful, I know that full well. My frame was not hidden from you when I was made in the secret place. When I was woven together in the depths of the earth, your eyes saw my unformed body. All the days ordained for me were written in your book before one of them came to be.” (Psalm 139:13-16)