Society goes mean. Is there still kindness out there?

Why are we so mean? 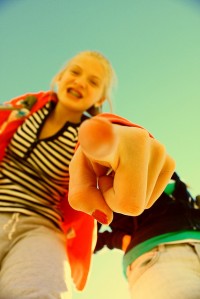 As a teacher in the school system I hear a lot about bullying.  I work with the Gay Straight Alliance group and we do lots of  different activities to try to make our school climate better.  Theoretically we don’t allow bullying.  Having said that, it isn’t just the kids who bully, but some students bully the teachers, and there is also bullying on staff.  It is easy to lose heart!

I don’t know why I find it surprising that people seem to so enjoy making fun of others.  Look at the popular television programs.  We watch shows where people who are struggling  are not helped to succeed but ridiculed and ultimately eliminated.  Shows that are meant to be about helping people learn how to dress or decorate better start with mocking secret video footage making them look awful. People avidly watch shows about overweight people trying to lose weight, or people fighting addictions.  In theory they are for inspiration or education, but they encourage ridicule.  Even as I am typing this a show called My Deadly Appetite just started.  People in real life will actually take pictures of people so that they can laugh at them and show others to share in the joke.  Are we so insecure with ourselves that we need to put others down.

Somehow we need to turn this around.  We are much more aware of bullying now but we have we really changed?  How do we go about making people kinder?  I don’t really have any answers.  I start by being kind and hanging out with other kind people.  I do not allow unkind statements in my classroom, or at least I let it be known that it isn’t ok and respond to shut it down if it gets started.

A good friend of mine, W. Owen Thornton was so concerned with this issue that he began The Human Kindness Project and I highly recommend his website http://www.thehumankindnessproject.com/.  His latest post is called Be Contagious: Be …Glitter